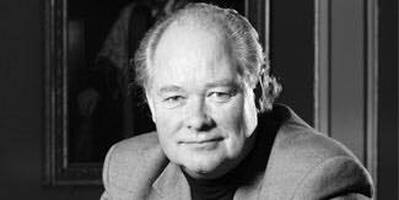 Colin Metters
"Colin Metters is considered universally as one of the world's most distinguished and sought after conducting pedagogues, in demand internationally as a performer, teacher and adjudicator.  If the test of any great teacher is the respect that he commands from his students, then Colin Metters is without doubt a great teacher."
​
Raymond Holden. Conductor, broadcaster, lecturer and distinguished author of books on conductors and conducting. 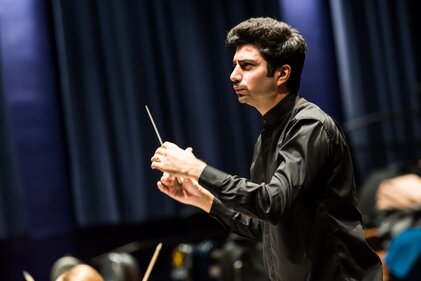 
Jonathan travels for projects throughout Asia and Europe. He is currently Music Director of UK based Ensemble Cambrica and Artistic Director of the Immanuel Orchestra - Music for Life Foundation in Thailand.
At the Jeunesses Musicales International Conducting Competition 2015 in Bucharest, Jonathan received the George Enescu Philharmonic Orchestra prize and a special jury prize leading to his Polish debut with the Kielce Philharmonic Orchestra. He was also previously selected as one of 20 finalists from 300 live auditionees to participate in the prestigious Besancon International Conducting Competition in France.

As founder and Music Director of the Cardiff Sinfonietta, Jonathan Mann oversaw the orchestra’s expansion over a 15 year period. The orchestra broadcast for the BBC and S4C and worked with soloists including Nicola Benedetti, Dame Evelyn Glennie, Benjamin Grosvenor, Sunwook Kim and Dennis O’Neill.
At the start of 2020 the Cardiff Sinfonietta merged with the Welsh Sinfonia to form Ensemble Cambrica, an exciting new orchestra aimed at reaching the community in new ways. Their first project was a series of virtual orchestra performances raising money for health workers and freelance musicians in need during the COVID-19 crisis.

Passionate about inspiring young musicians, Jonathan Mann has conducted numerous youth orchestra festivals around the world. Since 2015 he has been Artistic Director of the Immanuel Orchestra in Bangkok which is loosely modeled on the renowned Venezuelan music program ‘El Sistema’. During this time he has raised the standard of the orchestra performing symphonies by Beethoven, Haydn, Mozart and Schubert. He also helps to mentor students and encourage them into higher education.

Jonathan is also a popular teacher of conducting as guest clinician for universities and conferences and teaches classes at his home and virtually. He is Artistic Director of the Cardiff International Academy of Conducting providing intensive live and virtual courses for emerging conductors and with the founding of the Thai Conductors Forum in 2019 he has started to mentor a new generation of young Thai conductors.

Jodie Blackshaw (b. 1971) grew up in the Riverina region of NSW, Australia and her attachment to rural Australian life is evident in her music.

Since graduating with a Bachelor of Music (Composition), Blackshaw has passionately searched for a compositional approach to wind band that offers students the opportunity to create as well as perform.  Throughout her teaching career she collected hundreds of student compositions and as a result of this, plus an eclectic teaching career encompassing one-on-one teaching, classroom music and ensemble direction, has found that the most influential teachers on her compositional voice have been her students.

In 2006 Jodie won the inaugural Frank Ticheli Composition Contest and since then has created a distinct portfolio of works that are performed throughout North America, Europe and the Asia-Pacific region. Jodie is also an advocate for equality and in late 2018 curated the www.colourfullmusic.com website that features a collection of diverse concert programs created by revered conductors for the wind band medium.

Jodie completed her PhD in Composition in 2020 at the Australian National University under Supervisor Dr. Christopher Sainsbury and Associate Supervisor Professor Craig Kirchhoff. Her studies identified a point in the compositional process that provides composers with a distinctiveness according to the focus of their initial musical sketches. In some cases, composers commence with rhythm, for others, it is harmony or melody; in Blackshaw’s case, it is timbre. Hence as a result of this all-important study, she now self-identifies as a “colour-first” composer.

Blackshaw is fanatical about producing quality, meaningful works for band and is frequently commissioned by various groups throughout the western world to do just that. She desires that her music not just be "another piece, but an educational and spiritual journey for both the players and the director". To find out more about Jodie and her works please go to: www.jodieblackshaw.com 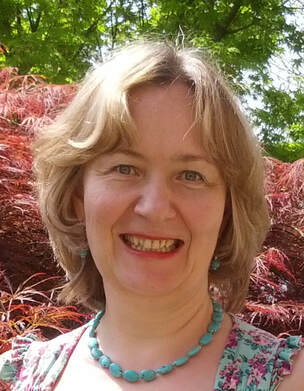 Irina has been living in UK since 1995. She is head of music at the ACS Egham International School, and founder of Friendship Through Music - an annual concert series drawing together music students from a number of schools in Egham and Slough, at which she conducts the joint choir. She also teaches aural musicianship at the Purcell School for Young Musicians. She has a passion for Russian and Eastern European choral music and is in demand giving workshops and lectures on various aspects of Russian and Eastern European choral repertoire and style, for ABCD(the Association of British Choral Directors) and others.

She loves singing Russian songs, while improvising a piano accompaniment, and is delighted to be sharing some of the many beautiful and passionate Russian melodies with a wider audience through her choral arrangements published by Canasg Music (www.canasg.com) 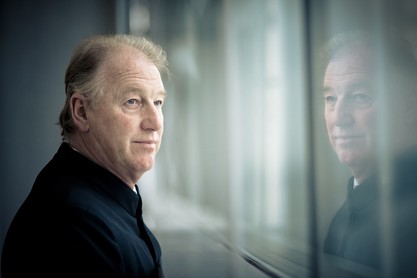 Jac van Steen was born in The Netherlands and studied orchestra and choir conducting at the Brabants Conservatory of Music.

Since participating in the BBC Conductors Seminar in 1985, he conducts the best orchestras in The Netherlands, the United Kingdom, Switzerland and Germany, which included holding the post of Music Director and Chief Conductor of the National Ballet of The Netherlands, the orchestras of Bochum and Nürenberg, the Staatskapelle Weimar, The Opera and Philharmonic Orchestra of Dortmund Musikkollegium Winterthur and Principal Guest Conductor at the BBC National Orchestra of Wales.

He is currently Principal Guest Conductor of the Prague Symphony Orchestra and the Ulster Orchestra in Belfast.  He made his debut with Opera North in 2013 as well as with the Volksoper in Vienna. In 2015 he has made a very successful debut at Garsington Opera. In 2015-16 Jac visited the UK regularly for various engagements with the British orchestras such as the Philharmonia Orchestra, the CBSO, Opera North and the Ulster Orchestra. In the present season he returned to Opera North with very successful performances of Puccini’s Il Tabarro and Suor Angelica, the Volksoper Vienna with Korngold’s Das Wunder der Heliane and made his debut in Tokyo with the New Japan Philharmonic with an all-American programme. He has participated in many recordings for the BBC, as well as live broadcasts of his concerts. There are a substantial number of CD recordings of his work with various orchestras.

​Besides his activities as conductor, he is dedicated to teaching and is Professor for Conducting at the Royal Conservatory of Music in The Hague. He also regularly works with the Royal Northern College of Music and Chetham’s School of Music (Manchester) as well as the Royal Academy and Royal College of Music (London). 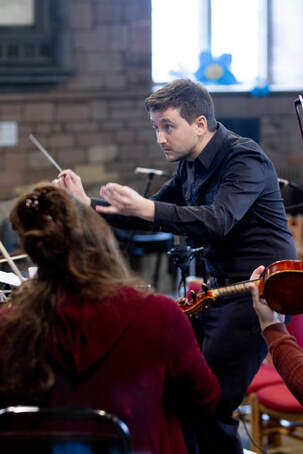 Robert Guy
Robert hails from North Wales and is a conductor, concert presenter, artistic director and teacher with a breadth of communication and interpersonal skills. An advocate of new music, Robert has con- ducted significant world premières which include working with the Orchestra of Opera North in Kevin Malone’s Violin Concerto and NEW Sinfonia in Rebecca Dale’s Requiem Materna and Paul Mealor’s Symphony No.2. He was selected by Kirill Karabits to work with the Britten Pears Orchestra in their Young Artists’ Programme.

As Artistic Director and co-founder of NEW Sinfonia, orchestra in residence at the North Wales In- ternational Music Festival, Robert has worked with leading soloists including Tamsin Waley Cohen, Federico Colli and Raphael Wallfisch and has led education workshops featured by the BBC. A com- mitted advocate of collaborative working, Robert leads an evolving partnership with Welsh National Opera in North Wales where he has conducted Carl Orff’s Carmina Burana and Haydn’s The Creation. He is grateful to the Arts Council of Wales for their support in his vision to create a partnership with Disability Arts Cymru.

As a guest conductor Robert works regularly with Manchester Camerata where he has performed with trumpet virtuoso Tine Thing Helseth in a new concerto Seven Halts on the Somme by Deborah Pritchard, recorded for Sony Playstation and performed for Manchester International Festival. Pas- sionate about audience and community engagement, Robert is a skilled concert presenter, animateur and education workshop leader in a range of settings from schools to care homes in cities and rural communities.

Robert is proud to be Director of the University of Manchester’s elite undergraduate conducting pro- gramme, Head of Choral Programmes and Director of Ensembles. In these roles he directed the first performance of Barry Cooper’s new Bärenreiter edition of Beethoven’s Missa Solemnis, and has led memorable performances ranging from Elgar’s The Dream of Gerontius to Rachmaninoff’s Symphonic Dances and Maharal Dreaming by John Casken. He has been involved in several prestigious projects including at the BBC Proms as Assistant Conductor to Simon Halsey and the BBC Proms Youth Choir. At Huddersfield University he devised and now delivers two BMus courses teaching and mentoring stu- dents with particular focus on equipping aspiring music teachers with conducting skills to build their confidence in directing ensembles.

Robert is currently Principal Guest Conductor to Stockport Symphony Orchestra where he has co-pre- sented concerts with Lindsay Russell (Blue Peter). He is Principal Conductor to the Orchestra of Square Chapel where he is currently working through the late Haydn and Mozart symphonies. Last season he completed a Beethoven milestone having conducted all nine symphonies. He has conducted the Huddersfield Choral Society and Huddersfield Philharmonic Orchestra in Britten’s War Requiem and Walton’s Belshazzar’s Feast at Huddersfield Town Hall.

Frequently in demand as an empathetic and committed conductor of youth orchestras, Robert has been invited to conduct at APAC Orchestra Festival - Vietnam and has recently led projects for AMIS - Salzburg, Haileybury Astana - Kazakhstan, NLCS - South Korea, Pro Corda at Cadogan Hall and the National Youth Orchestra of Wales
​
Robert is a proud former member of the National Youth Orchestra of Wales, Liverpool FC fan and ear- lier this year ran his first Peak District trail.